The new Cross River Rail is a 10.2 kilometre link from Dutton Park to Bowen Hills.

Brian Bedding, an experienced Construction Manager, with a broad range of experiences in small and large scale project delivery – from commercial building to retail, civil and mining infrastructure, to
refurbishment projects.

Graeme just recently finished a great contract on the Gorgon over three years working on various areas in the quality team, having conducted vendor releases and inspection in the UK Europe and Asia, He was also a member of the Audit Team working on audits at GE in Italy, Hyundai in Korea

One of tools that you may want to use as part of your Project Controls Suite is Primavera P6 for managing your project scheduling needs. Below is a great 10 lesson YouTube collection which will help you get started with using Primavera P6

Available Now – Project Controls Engineer for Brisbane Assignment. A Civil Engineer with over 9 years of experience on large scale Industrial projects in the Resource Sector who has enjoyed a diverse career in both Oil & Gas and Heavy Civil/Mining Industry.

The Australian and NSW governments are funding a 10 year, $3.6 billion road investment program for western Sydney. The Western Sydney Infrastructure Plan will deliver major road infrastructure upgrades to support an integrated transport solution for the region and capitalise on the economic benefits from developing the proposed western Sydney airport at Badgerys Creek. 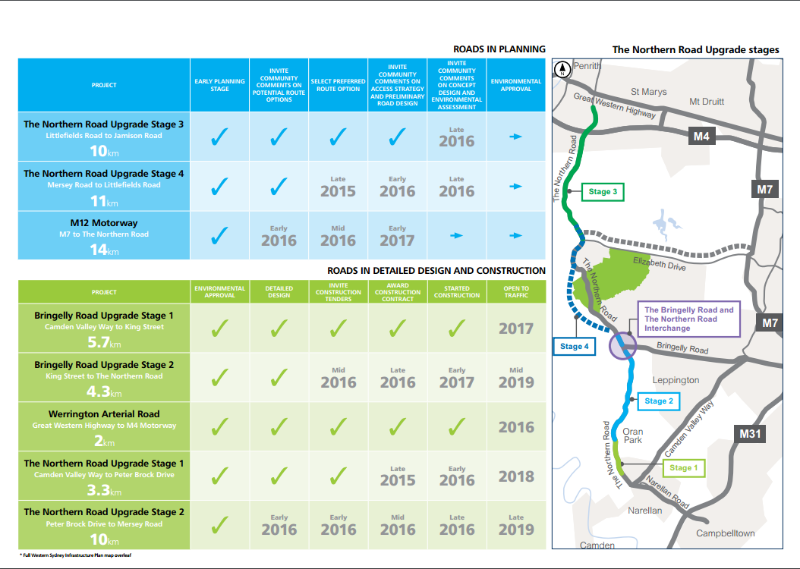 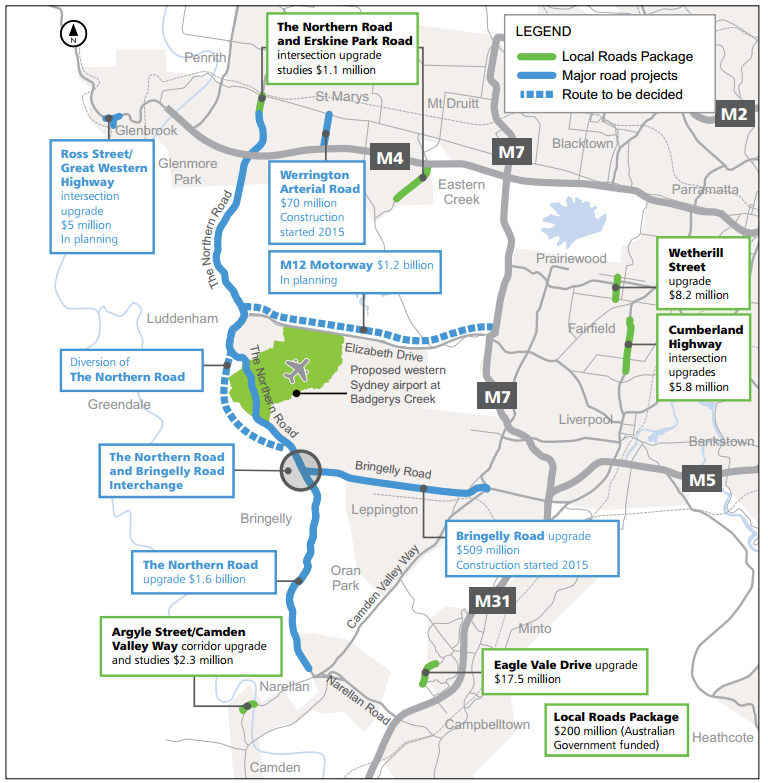 The project will upgrade around 35kms of The Northern Road from Narellan to Penrith. The project will see The Northern Road upgraded to a minimum four lane divided road, and up to eight lane divided road with dedicated bus lanes. The upgrade will be undertaken in stages to minimise disruptions to traffic. The first stage will involve the southernmost section of the road near Narellan, consistent with planning undertaken by the New South Wales Government. The upgrade to The Northern Road will also include interchanges with the new M12 motorway, the M4 and Bringelly Road.

The Northern Road Upgrade stages are:

Kicks Off for Stage 1 The Northern Road Upgrade

The Australian and NSW governments have provided $509 million to upgrade Bringelly Road between Camden Valley Way and The Northern Road.

The Bringelly Road Upgrade will deliver new and upgraded roads to support integrated transport in the region and capitalise on the economic benefits from developing a western Sydney airport at Badgerys Creek. It will also improve safety, increase road capacity and reduce congestion and travel times in the future.

This 10km project will include the upgrade of Bringelly Road from two lanes to a six lane divided road between the eastern side of Upper Canal bridge and the western side of the Eastwood Road intersection, through the future Leppington Town Centre. The rest of Bringelly Road will also be upgraded from two lanes to a four lane divided road with a central median, which would allow for widening to six lanes, when required.

The Bringelly Road Upgrade will be delivered in two stages:

Roads and Maritime is also developing a proposal to upgrade the intersection of The Northern Road and Bringelly Road, Bringelly to a grade separated intersection (overpass).

Construction on stage one of the upgrade commenced on 20 January 2015 with construction of this stage expected to be completed late 2017.

The new motorway will provide direct access to a western Sydney airport at Badgerys Creek and connect to Sydney’s motorway network.

The proposal is for an east-west motorway of about 14km between the M7 Motorway and The Northern Road which would provide increased road capacity and reduce congestion and travel times in the future. It would also improve the movement of freight in and through western Sydney and is expected to serve the South West Growth Area and the Broader Western Sydney Employment Area.

Currently a study area has been established to investigate the social, technological and environmental impacts the road will have and proposed routes will be made available for public viewing and feedback in early 2016.

Key features of the proposed M12 Motorway will be:

Planning for this project is underway with construction expected to commence in mid 2020 and be completed in 2024.

Kent Road and Gipps Street, Claremont Meadows is being upgraded to form the new Werrington Arterial Road. The Australian and NSW governments have provided $70 million to build this improved road infrastructure.

This upgrade will create a new link between the Great Western Highway and the M4 Motorway, increase capacity and improve travel times.

Construction started in March 2015 and the new Werrington Arterial Road will be open to traffic in late 2016.

The Australian Government has announced that Badgerys Creek will be the site for a Western Sydney Airport.

The Government is strongly committed to the Western Sydney region, where a new airport would be a major generator of economic activity—providing employment opportunities closer to where people in Western Sydney live.

Already over 300 jobs have been created as the first road projects of the $3.6 billion Western Sydney Infrastructure Plan are now underway. The roads package and proposed airport would create up to a further 7,600 jobs during construction.

Over 30,000 jobs could be generated directly by the airport’s operation by 2060, and indirect employment around the airport site could contribute an additional 30,000 jobs.

The Minister for Infrastructure and Regional Development confirmed that Community submissions on the draft Airport Plan and draft Environmental Impact Statement (EIS) for the Western Sydney Airport are now being compiled and considered after the 60 day consultation period closed at midnight on Friday 18 December.

“The consultation period has been an opportunity to ensure that this important infrastructure project will be able to deliver the best outcome for the Western Sydney community,” Mr Truss said.

“In total, we have received over 4,500 submissions, which will now be taken into account in finalising the EIS and Airport Plan. The final EIS will be provided to the Minister for the Environment for consideration and decision early next year.”

The comprehensive consultation period was widely promoted and included:

The Train to the Plane Connection

Badgerys Creek train line unlikely to be built before western Sydney airport opens. An airport will open at Badgerys Creek in about a decade, but the NSW and federal governments have admitted it’s unlikely that a train line to the site will be built in time.

The admission was made as the governments pledged $1 million each for a rail options plan, which is aimed at identifying how to best connect Badgerys Creek to the network.

“It’s not envisaged that there will be passenger rail transport available in the early years – the road network has been designed to take all of the traffic that’s expected in that period,” Federal Minister for Infrastructure Warren Truss said.

Plans are underway to fast-track thousands of jobs in western Sydney, even before Badgery’s Creek airport is fully developed

This Project must be keeping the Project Team very busy as the Planning involved would be very intense.

The above updated fly-through of GCLR Stage 2 based on the current reference design and prepared by the Queensland Government.

Gold Coast Light Rail Stage 2 is a proposed 7.3 kilometre light rail link between Parkwood and Helensvale. The City of Gold Coast has committed $55.1 million in funding while the Commonwealth Government has committed $95 million towards Stage 2.

This extension will provide a seamless connection with heavy rail, providing a world-class integrated public transport solution for residents and visitors. It will provide a one-transfer journey between the CBDs of Queensland’s two largest cities – Gold Coast and Brisbane.

In October 2015, GoldLinQ shortlisted 3 proponents and a Request for Tender phase is now underway. For more information about GoldLinQ or the procurement process visit www.gclrstage2.com.au.

Construction is expected to commence in April 2016 to ensure the light rail extension is delivered and operational prior to the 2018 Commonwealth Games.

You can visit www.gclrstage2.com.au to read more or click on the links below

Three proponents have been shortlisted to design and build Stage 2.

Requests for Tender closed Wednesday 23 December 2015 with the intention of appointing a preferred contractor in early 2016 to ensure the light rail extension is delivered and operational prior to the Commonwealth Games commencing in April 2018. 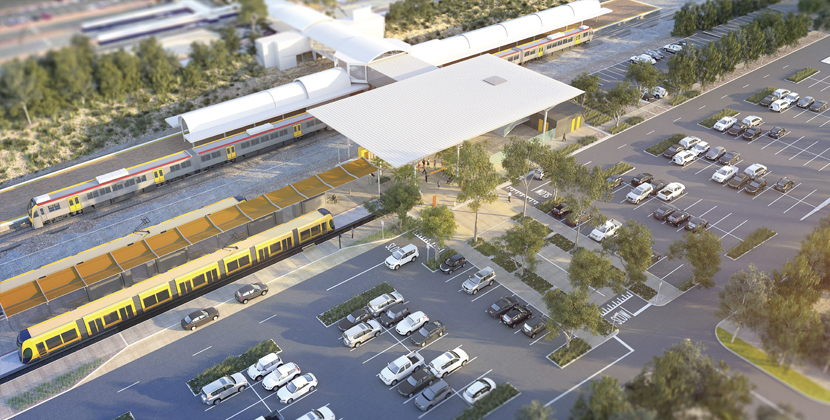 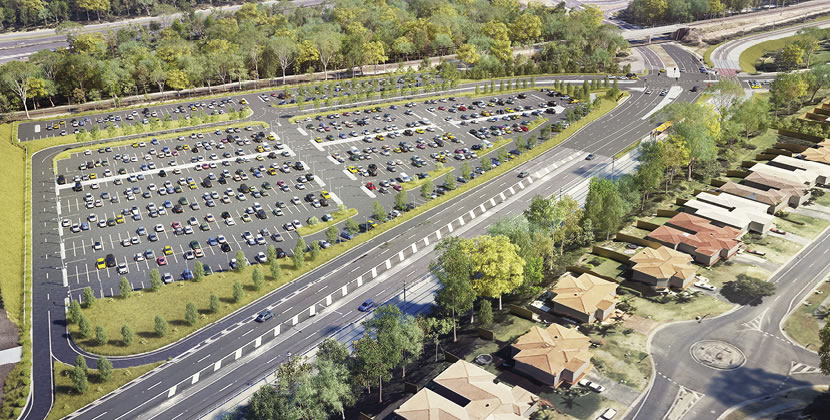 This  updated fly-through of GCLR Stage 2 based on the current reference design and prepared by the Queensland Government.